Never Stop Marketing CEO Jeremy Epstein says the revolutionary system will have the same power and influence as the internet itself.

APAC B2B marketers have been warned that they had better start understanding the impact of blockchain technology because it will soon change “everything”. US expert Jeremy Epstein, who has created the world’s first Blockchain Marketing Technology Landscape schematic, says marketers who think the revolutionary distributed record-keeping and processing system is for the future are mistaken. “It’s like the internet – it’s going to affect everything,” says Epstein, the CEO of advisory firm Never Stop Marketing who has written a 70-page ebook called The CMO Primer for the Blockchain World. “The decentralised advertising ecosystem is exploding – there are 10 or 12 already – loyalty [and email] systems are picking up steam as well. My book has forewords from the CMOs of Nasdaq and Dun & Bradstreet, so I thought I’m not alone here about this.” Although its value for marketers is still to be tested, blockchain has been called an “incorruptible digital ledger … that can be programmed to record virtually everything of value”. In an idealised blockchain world, all data is open and trustworthy, and no intermediaries are required to interpret it or make it available. All customer leads are easy to track and verify, and all transactions with suppliers and partners are direct and secure. Information within organisations can be shared quickly and efficiently. Blockchain’s most prominent use at the moment is in cryptocurrencies, such as Bitcoin, which allow anonymous peer-to-peer transactions between individual users without the need for banks or other financial institutions. But its influence is spreading well beyond money transfers. Microsoft recently announced its “Coco Framework” – an open-source blockchain network for enterprise customers. It hopes to provide “a means to accelerate production enterprise adoption of blockchain technology”. In his schematic, which is modelled on Scott Brinker’s confronting 5000-company martech landscape, Epstein has listed marketing-related businesses already using blockchain technology in video and email marketing, social media, advocacy and loyalty, ecommerce, analytics, talent management and collaboration, CRM and advertising and promotion.

“My job is to help people understand that this thing’s coming,” Epstein says. “If [marketers] choose to ignore me and other people … well, it’s like me coming to you in 1994 and saying ‘There’s this thing called the internet – it might be worth paying attention to’.

“It’s like there’s a hurricane coming. You may want to board up your house and leave town. You don’t want to do that? OK.”

Epstein says he wanted to create a landscape because he saw how quickly the blockchain marketing environment was expanding. He believes entrants will move to grab any “low-hanging fruit”. “I suspect it’s going to be pretty crowded down the road in some form or fashion, and then it will solidify around the dominant players,” he says. “There might be niche ones, there might be interoperability. Who knows? But it will be interesting to see it evolve.” Epstein says blockchain may have a greater impact on marketing than any previous technologies. “My hypothesis is that although there are some things about marketing that are eternal, with the arrival of every new disruptive technology the execution and practice of marketing changes,” he says. “We’ve seen this for the last couple of hundred years – newspapers claim scale against reach, then radio, TV makes it visual, the internet speeds it up and makes it two-way, and mobile makes it occasion-independent. Once I got my head around blockchain, I was wondering whether that pattern would hold.” He doesn’t think marketers keen to know blockchain’s impact should be scared off by the complicated technology involved. “You don’t need to understand that SMTP is the protocol that makes your email work – you just need to know that email is more reliable and faster than mail or fax,” he says. “What I say to people is that, at its core, blockchain is a decentralised database. It increases security, reduces risk and cost and saves time by allowing information to be appended – no historical information can be modified or deleted. Everyone has access to the information and ultimately this increases trust in the system. If you’re in the middleman business, you have a problem.”

“Right now, if you’re the CMO, you have all of these advantages. You should be super excited.”

Having greater transparency in the blockchain system has implications for B2B businesses, he says, that haven’t been as exposed to disruptive customer-facing technology such as online review sites. “Marketers have realised over the last 10 to 20 years that you can’t bullshit your customers any more and expect to get away with it,” Epstein says. “You’re going to be held accountable. We’re going to see a lot more of that in the B2B space. They’re going to have to deal with it. You can’t make unsubstantiated claims, which we know B2B marketers make all the time, and if you’re not adding value you’re going to be disintermediated.” Epstein says if you are a CMO at a large B2B company, blockchain might offer great opportunities right now. “You have a couple of things that startups don’t have,” he says. “You have customers, which is big, you have a brand that many people recognise. You have scale and some degree of infrastructure that they don’t have. You have money (it may be ‘funny money’ and real money until it switches) and you actually have some time. So if you’re a forward-thinking CMO, you’ll be like there’s this massive technology coming and I have a headstart on the startups. “There’s a race in any type of technological adoption between the innovators, who are trying to get scale, and incumbents, who are trying to innovate. It’s who gets there first. Right now, if you’re the CMO, you have all of these advantages. You should be super excited – like, ‘let’s get started’ – because it’s a chance to get out ahead. “Don’t get blindsided when all of these other guys figure it out. If you don’t do that, then you should be concerned.” Photo by Bethany Laird on Unsplash 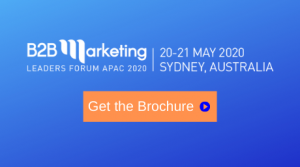